The Digital Skills and Jobs Coalition (#DSJCoalition) was launched in Brussels on December 1st. Vice President Andrus Ansip and Commissioner Guenther Oettinger led the launch. The Member’s Charter serving as a guide to bridging the digital skill gap was unveiled. Winners of the first ever Digital Skills awards were announced at the event.

Telecentre Europe members are active in the coalition with many taking part as pledgers, as members or coordinators of a national coalition. Ten member of Telecentre-Europe attended the launch event.

There are two ways to Join the Digital Skills and Jobs Coalitions. Firstly, members can join by making a pledge. Pledges are ‘promises’ organisations make to bridge the digital skill gap: this can range from promising to train a certain number of people in digital skills, upskilling a certain number of people in digital skills, getting digital skills workshops to reach a certain number of schools. Pledges must be quantifiable and will be tracked through the #DSJCoalition website through a pledge tracker. The old pledge tracker for the Grand Coalition on Digital Jobs can be found online. Telecentres Europe’s own pledge regarding the Get Online Week was confirmed. Telecentre Europe Member LIKTA, HEPIS, and the Basque Government made pledge which were also approved and unveiled at the launching event. 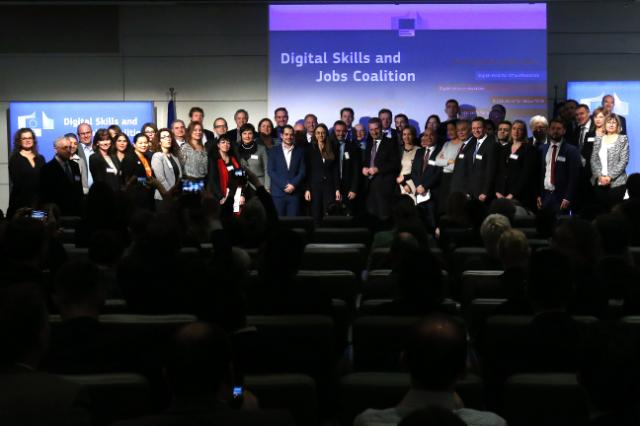 The second way to take part in the #DSJCoalition is to join a National Coalition. Currently, there are National Coalitions in Belgium, the Netherlands, Bulgaria, Latvia (coordinated by LIKTA), Lithuania (coordinated by Langas i Ateiti), Italy, Portugal (coordinated by FCT Portugal), Cyprus, Malta, Greece, Romania and Poland. Coalitions have been recently launched in Estonia (coordinated by Telecentre-Europe member Vaati Maailma), Slovakia, The Czech Republic, Ireland, Spain, and Slovenia. The #DSJCoalition hopes to form coalitions in UK, Luxembourg, Sweden, Denmark, Finland, Austria and Germany and thus have a coalition in every country. National Coalitions are broad-based multistakeholder partnerships comprising of (but not limited to) industry partners, ICT companies, government ministries, education partners, the national Digital Champion and civil societies. The National coalition works to execute the national Digital Agenda, or digital strategy and work, or on developing a digital agenda in its absence. It can be summarised that the two ways to take part in the Digital Skills and Jobs Coalition is either through quantity (pledges), or strategy (National Coalitions).

The event was structured around two panel discussions to set the scene, followed by 4 parallel sessions, where participants could dig deeper in the topic which was most relevant for them. The panel discussion on Digital Skills and School Education was led by Commissioner Navrascisc and Mirta Michili, from member organisation Fondazione Mondo Digitale took part presenting their innovation gym as a form of cooperation between schools and non-formal training providers. 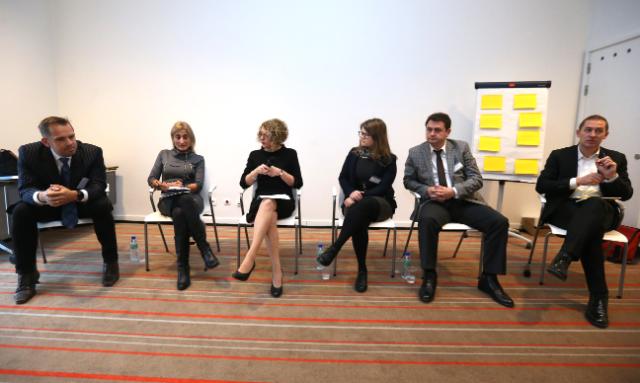 Session on National coalitions at the #DSJCoalition launch event

Another parallel session on Assessing Digital Competences features a presentation by Ana Isabel Vitoria Leoz from member organisation KZgunea of the Basque Government on the IKANOS project – the most elaborate implementation of the European Digital Competence Framework so far.

You can follow more on the Digital Skills and Jobs Coalition in this Linkedin Group.

More on the Digital Skills and Jobs Coalition can be found in the press release.