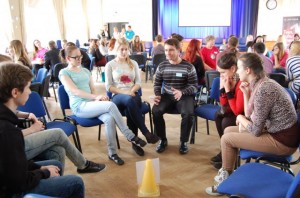 The 5th annual European Get Online Week (GOW) organized by Telecentre Europe took place in 25 countries on 24-30 March this year. Apart from its main mission to encourage people to gain basic knowledge about the Internet, the focus of this year’s GOW was to raise the awareness amongst the young and unemployed on the e-skills needed for the 21st century workplace.

This was the first year when GOW was part of the year-long eSkills for Jobs campaign organised by the European Commission, European SchoolNet and Digital Europe. GOW’s alignment to eSkills for Jobs and to the Grand Coalition for Digital Jobs has been extremely positive, boosting the reach and impact of GOW partners and actions.  Roughly 104,000 Europeans were involved in the GOW 2014, almost 54,000 taking trainings while another 50,000+ attended over 5,000 events at national or local level, like seminars and workshops. More than 7 million people were reached in total during this year’s campaign through media and social media.

Special thanks to: Liberty Global who supported the launch of a new youth career site YouRock and the creation of an infographic on ICT jobs and skills; and Microsoft for providing certifications on e-skills training and YouthSpark initiative which connects youth and ICT.

It is also worth mentioning that HP Life Programme was promoted during GOW in events and by organizations with a focus on entrepreneurship. Social innovation and entrepreneurship have been present in trainings, webinars, games and best practices set up for young entrepreneurs. In addition, 3,000 young people received Microsoft donated certifications to improve their employability.

In five years of GOW – 150,000 Europeans have used the Internet for the first time and more than 700,000 people have improved their lives since the start of this annual campaign. Over 10 million Europeans got to know about e-skills and telecentres. A successful GOW campaign was also running in Africa (MENA) co-organized by Telecentre.org Foundation. More details are coming in the final GOW campaign report next week.