“Thanks to Microsoft donation through its YouthSpark initiative, around 4.000 European youngsters with diverse backgrounds and limited opportunities to get formal recognition of their digital competencies, got their MOS/MTA certificates and are now in better position to demonstrate their e-skills to potential employers. At the same time, our local members and their Local Coalitions for Digital Jobs were equipped with a powerful tool – Microsoft IT Academy program – to deliver our shared goal to increase youth employability and digital skills of European workforce,” explained Gabriel Rissola, Managing Director, Telecentre Europe.

As part of the EU’s Grand Coalition for Digital Jobs, Microsoft has committed to supporting the Commission in fostering digital talent, grow the digital jobs economy and tackle the widening skills gap.

“Through Microsoft’s 30+ education, entrepreneurship and job-readiness programs, and partnerships with youth-serving non-profits around Europe, at the close of its second year Microsoft YouthSpark has created new opportunities for more than 45 million young people across Europe. Of these, over 6 million youth benefitted from digital literacy training and support through YouthSpark Grants and programs, providing them with a vital advantage in Europe’s volatile job market,” responded Sylvie Laffarge, Director Europe Citizenship, Microsoft.

More than 7,500 vouchers were utilized in 10 countries and almost 4,000 young people passed the exams to receive MOS & MTA certificates. Most of MOS certifications were distributed in Italy and Spain, while Poland was a leader in using the MTA certifications. The vouchers campaign also served the mission of Local Coalitions for Digital Jobs to increase youth employability locally.

James Varnham from European Skills & Certification Network‏, who was contracted by Telecentre Europe to support the implementation of the campaign, believes that organizations such as Telecentre Europe provide the ready-made channel to implement campaigns like this in a very quick and efficient way.

“In initiatives like this, where global leaders in technology such as Microsoft invest in giving young and disadvantage people the tools to prepare for, a globally recognized technology certification is an important element to address the skills shortages and gaps in the ICT sector. Consistent commitment to these types of initiatives is vital to keep up with the continuous changes in technology and addressing the demands of private and public sector,” he said. 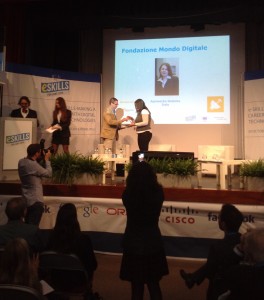 The closing eSkills for Jobs High-level Conference in Rome rewarded “The Most Active Job Seeker” on October 30, 2014. The selected success story was a result of Get certified. Get a job voucher campaign where Telecentre Europe’s member Fondazione Mondo Digitale provided over 1,500 Microsoft certifications to young Italians. Agnieszka Galazka, who got the award, learnt about this certification opportunity at a local job centre.

“My CV has a new and very important item now as ICT certification can make a difference for a woman in the labor market,” she concluded.

Hellenic Professionals Informatics Society in Greece distributed Microsoft examination vouchers to students of DEREE – The American College of Greece. One of them, George M. Chatzitheodosiou, shared his experience:

Interface3 training coordinator Laurence Leseigneur saw a great opportunity for her organisation to get involved and implement this certification program among their trainees to bridge the gap for administrative and commercial trainings.

“I also believe it can be a benefit in terms of image in my current job and for Interface3 as organisation,” said L. Leseigneur.

According to Microsoft, fewer than 15% of European students currently have access in school to the kind of high-level ICT teaching they need.

“If European youth are to compete in the digital age and be the creators not just the users of technology as the market is calling out for, a cohesive government and industry response is required to streamline computer science as a foundational skill alongside maths and science. We were excited to partner with Telecentre Europe around equipping youth with the digital skills and certifications they need,” S. Laffarge added.

The campaign has been highlighted as a best practice in one of the Grand Coalition for Digital Jobs workshops. Telecentre Europe is a key contributor to formation of Local and National Coalitions that are multi-stakeholder partnerships developed in Member States to enhance digital skills at national, regional or local level. 8 Local and National Coalitions have been involved in the promotion and running of the campaign.

Telecentre Europe partners with Microsoft on ICT certification since 2013. This initiative is part of the Microsoft YouthSpark Programme and is the result of a long-term partnership between Microsoft and Telecentre Europe aiming to promote the employment among young Europeans and address their lack of ICT skills.